The French Ambassador of Oud

Pierre Montale had a date with destiny 20 years ago in the far reaches of the Kingdom of Arabia.

Inspired by the beauty and hidden secrets of the Eastern world, between learning process and pure marvel, he composes with confidential and millennial olfactory materials such as rose, incense, amber, cedar, precious woods and a thousand other wonderful scents like happy ointments or love potions.

Back to his homeland in 2003, he presents his first creations under the aegis of the new eponymous house. A unique olfactory immersion revealing a perfection only accessible with our eyes closed.

On the range of Pierre Montale's most popular scents rises the spirit of the oud, keeper of traditions at the gates to the east. Fragrant Asian ointment commonly used in the gulf region and Saudi Arabia, this scent is extracted from the oud tree. A secret millennia process kept away from light during several years.

Subjugated by his infinite combinatorial properties, Pierre Montale became the first exporter of oud for the west. He will then compose more than a hundred of timeless fragrances.

What is The oud?

Oud is produced when the Aquilaria/Agar Tree is infected by a Sparasitic fungus. The tree naturally secrets a defense against this parasite. This mechanism produces a very dark and aromatic resin. This set of wood/parasite/natural defense is taken manually, sheltered from the light in cellars for several years. After a distillation process, the Oud is here.

It is a material used in spiritual rites and practices from the Middle East to the Far bats, crossing the border of religions.

Oud is a raw material that proposes itself, then imposes itself, gently and persistently. Its strength comes from the dents of the ages and the lands that have borne it, and its splendor, immediately perceptible, can be discovered and known only through time.

Travels, encounters and dazzling, from the desert to the domes of the citadel, experience the original emotion of this tireless traveler, who radiates silently in the first film of Montale Paris.

Passionate about Roses, Pierre Montale brings in his compositions Roses from France, Bulgaria, Turkey, India, Saudi Arabia... For ever more sensuality and originality. Their delicate scents, powerful and recognizable, evokes for the creator the very scent of the oriental gardens.

Vanilla was one of the first scents of the brand. Intimate, sensual and greedy, it is indispensable to the development of oriental perfumes. Montale parfums has more than 10 fragrances around vanilla bourbon: the most beautiful vanilla in the world from Madagascar.

Flowers offer depth and richness inside his creations. It’s absolute femininity. They represent the sun and the light. All our flowers are extracted in Grasse, the emblematic city of perfumes.

Musk, amber, patchouli, vetiver & sandalwood are perfumes on their own. Charnel, enveloping and sensual, these materials are essential in the montale landscape.

An essence, its case

The aluminum bottle, commonly used by the perfumers of Grasse in larger sizes to retain their perfume concentrates, has become a bottle of niche perfumery and a luxury product. It embodies the combination of luxurious modernity and the preservation of traditions.

The aluminum bottle Montale has been specially created to protect and preserve the valuable essences and contribute to their evolution.

A fragrance is a natural and living raw material, which continues its maceration. The fragrance you buy today will gain strength and roundness along its conservation. Time and maceration: The secret of an elixir.

An oriental touch from Paris

A real oriental olfactory experience created by Pierre Montale in 1993. More than an oud, it is the first fragrance from the house which offers an intensity and a total surprise, by its mastered originality.

Today, iconic of the montale’s house, he mets the components of the oriental identity & the French excellence.

Black oud is an awesome Cambodian oud blender with Indonesian patchouli leaves over a combination of mandarin, musk and roses petals. It is a perfume with a powerful wake of sensuality.

Montale through the eye of an artist Veronique Bigo 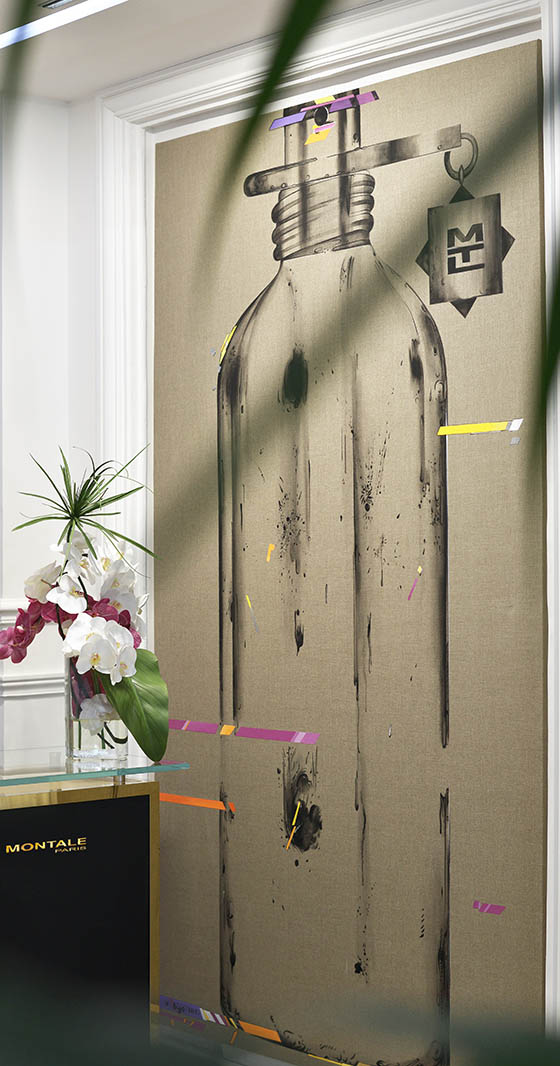 Montale through the eye of an artist Veronique Bigo

"Venus could wear only perfumes. The perfume is the only clothe which suits her beauty; it is revealing a perfection of which we couldn’t access with our eyes closed. We abandon ourselves in her immaterial arms and it carries us in another space where our skins and our breath have related party. Hidden in the heart of its own invisibility, it doesn’t cover the body, it doesn’t mask, on the contrary it shapes an intangible sensoriality that slides in us and grabbed our breath to irradiate up to our intimate depths.

Our senses are places of exchange. The fragrance borrows the most vital way, the ways through which exerts what our senses have most immediate, most necessary, most primal and most archaic. It establishes fundamental porosity, pass through the skins like a ghost, to whom that wears it and to whom it intends to: the other breath you, you enter into its blow.

Only Veronique Bigo was able to report of its invisible crossings. Her painting doesn’t cover its support of a coloured wall, it doesn’t interpose, it is not an obstacle to this breathing of the canvas that we are invited to feel. Transparent, it perfumes her, in the sense that it creates also exchanges between buried intimacies.

Montale through the eye of Veronique

As the perfume, it opens invisible doors, plays with the opaque materiality of things and the closing of spaces. Thus, your gaze goes through the metallic enclosure of the Montale’s perfume bottle.

And maybe you are able to, breathing deeply in front of the canvas and giving your senses to their intimate fantasy, feel that the perfume does the same, and that it invades you.

It is that Veronique Bigo didn’t content herself to represent a bottle of perfume: she painted the perfume itself. In turn, we should not content ourselves by staring looking it. We should breathe in front of the canvas, we should open our secret doors and let flows in ourselves the invisible essence of her painting."